We have a number of day tours on offer at Country and Coastal Touring, but I believe one of the most popular tours we run is the “Valley of 1000 Hills Day Tour” that encompasses both a visit to the Tala Game Reserve and PheZulu Safari Park.

Tala Game Reserve is situated within an easy drive of Durban (45min depending on traffic). The game reserve doesn’t have the “Big-5”, but there is loads of other game that make a visit to this park so worthwhile; Hippo, Rhino as well as Eland and Kudu among others.

On our most recent visit, my two clients from the UK were treated to the sight of a very large female White Rhino pass so close by the vehicle that we honestly could have reached out and stroked her as she passed by!

A little later we came across a “tower of Giraffe” that stared at us with some interest for ages. Giraffe are always show stoppers, I think partly because of the way they look and partly because they are so patient, they seem quite happy to just stand by as cameras flash away!

Once we had finished up at Tala Game Reserve we headed towards Botha’s Hill where lunch awaited. I always go to the same place, a small restaurant called Hillybilly’s. Owned by Brad and Rachel, Hillbilly’s has a welcome spirit and a warmth that can only come from family owned establishments. 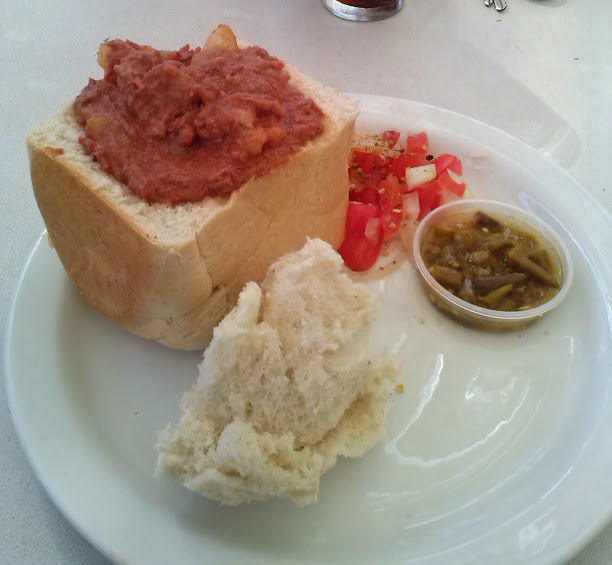 I’m always asked as to what I would recommend to visitors to eat, and my answer is invariably the same… it’s Durban’s gift to the culinary world, the “bunny chow“. Originating from the Indian community of Durban, a bunny chow is quite simply a half-loaf of bread that’s had it’s insides hollowed out and replaced by a curry! How could you go wrong?

With very full tummies, it’s on to PheZulu Safari Park. The park was established back in the late 90’s and has been running strong ever since. Not only is there a small model Zulu village for visitors to look at, there’s also a 30 min Zulu dance show that depicts the courtship and marriage of a Zulu man and woman.

And if that weren’t enough, a minute’s stroll away is the PheZulu reptile park. On a recent tour I was describing to visitors that Nile Crocodile tend to spend much of their day basking in the sun and not doing much else, when two of the Crocodiles got into a fight, it was as exciting as it was scary!

For day visitors to Durban, this is often the best tour to take as it’s close enough to Durban to not be stuck in car for hours on end, and of course you get too see some beautiful animals and meet very friendly South Africans, so a win all round!

So for to experience Tala Game Reserve and PheZulu Safari Park for yourself, simply contact us using the form below, and we’ll treat to a wonderful day out in Durban!

Country and Coastal Touring are registered tour operators and tour guides in Durban, in the KwaZulu-Natal province of South Africa. We organise and conduct a range of tours across South Africa. For more information contact us or request a brochure.

10 Things You Must Do When Visiting Durban

You’ve checked into your hotel, unpacked your bags and had a good nights sleep, so you’re all refreshed and ready to take on the world and more importantly, get stuck into your vacation. The next Read more…

Is Durban a Safe City to Visit?

Let’s be honest for a minute; it’s bad news that sells newspapers right? We humans are a weird bunch, we slow down at vehicle collision scenes, we strain to get a better view at crime Read more…

Recently we wrote a blog post on how to spend 3 days in Durban. This post was so popular that we got quite a few emails asking us for more itinerary proposals. More than a Read more…