At the top of Berea Road on the corner of Julia Road, not far from McCords Hospital, is a little cemetery and church that if you were to blink whilst driving past, you’d miss it entirely! Within the graveyard lies the remains of Julia, the 12 year child of Captain Gardiner. It’s here that the first mission in Durban was established, and here where the name “Berea” originated. Capt. Gardiner was a fascinating man, a man of contradictions who’s death was not only immensely sad but equally bizarre, and who’s time in Natal seems to have been conveniently forgotten in historical accounts of him. 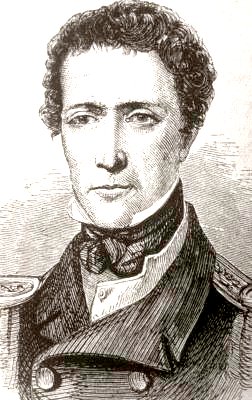 Born in 1794, Gardiner was a deeply religious man with a strong desire to explore far places of the globe. He embarked on a naval career which suited him perfectly, both the hard-work and the exploration. In 1823, Gardiner married Julia Susanna and together they had five children. Mrs Gardiner suffered from ill-health and the family moved often for her, but in 1834 Mrs Gardiner’s ill health got the better of her and she passed away on May 23, 1834, the anniversary of which Gardiner fasted until his death.

After his wife’s death, Gardiner devoted himself to missionary work with a passion that bordered on the ridiculous. His first port of call was Africa, specifically Port Natal. Gardiner had stopped in Cape Town en route to England in 1822 (not for the first time) and it’s during this period that he seems to have made a decision to bring the word of God to the Zulu.

In December 1834 an impatient Gardiner, having outstripped his companions and personal consignment in his rush to start preaching finally made Port Natal from Cape Town. He continued without pause to uMgungundlovu in order to meet Dingane, the King of the Zulu’s, in order to gain permission to start preaching. Their first meeting was not an auspicious  one because Gardiner had no gifts to present to the King as was customary, they were still with his companions and had yet to arrive. Dingane was vexed enough to make Gardiner describe each item in detail, one item in particular captivated Dingane’s imagination, a red cloak that Gardiner was advised by Mr. Finn to include. Dingane kept Gardiner around for two months, summoning him at various times for his amusement and after this period in any case refused Gardiner’s request to build a mission and preach the Word of God, mostly because Dingane could not really see nor understand the point of Gardiners religion and to top it off, Dingane’s translator was Jakob, a cattle thief from the Cape that on more than one occasion proved his untrustworthiness. Jakob had been for some time warning the Zulu King about the dangers of white missionaries.

Gardiner kept a journal, which was later lost, about his time with the Zulu King. When he returned to England some time later he was able to recall most of his experiences and promptly published a book about his experiences. With such personal experience, it is difficult to understand why Gardiner later acted with such a naivety that caused him to be shunned not only by the Zulu’s but also by his own Durban congregation.

After being sent back to Port Natal and heavily discouraged, Gardiner brightened when some settlers petitioned him to conduct services for themselves. Along with the 50 or so Europeans, Port Natal was also home to over 3000 natives, all he felt, in dire need of the Word of God. Petitioned March 14th 1835, Gardiner lost no time and within 3 weeks had not only found a site for his mission on a ridge overlooking the bay which he christened “Berea” (from the scriptural city),  but he had also preached to six hundred natives and opened a native school with 6 pupils.

At this point it seems that Gardiners missionary work was exactly where he wanted, he was bringing the Word of God directly to the towns folk of Durban as well as the large Native contingent, things however, were about to change drastically for Gardiner.

Visiting KwaMashu on a Township Tour

One of our popular tours (and one I love doing) is our township tour to KwaMashu township north of Durban. When I traveled around the world all those years ago I was always fascinated by Read more…

The province of KwaZulu-Natal is known for having a large number of game reserves especially in the Zululand area. We offer a range of Durban Safari Tours and packages to various game reserves that will Read more…